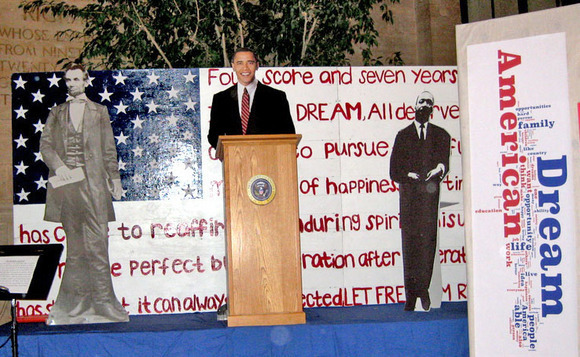 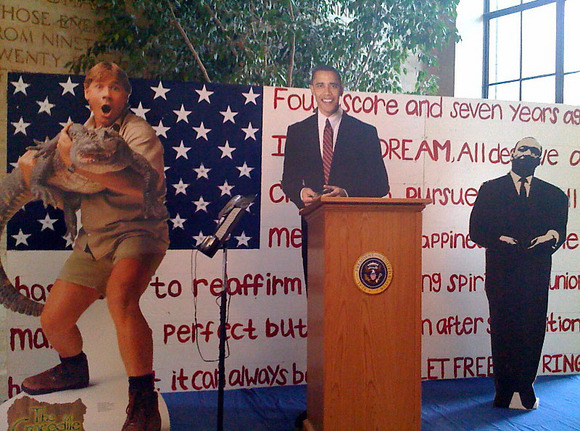 The “On the Shoulders of Giants” display was vandalized during the week of Feb. 2; a cardboard cutout of President Abraham Lincoln (pictured here) was replaced with a cutout of “Crocodile Hunter” Steve Irwin. Photo: Brian S. Coffey, The Tech 2009

Pres. Susan Hockfield and Prof. J. Phillip Thompson, Chair of the Committee on Race and Diversity, issued a statement in response to vandalism of the MLK exhibit. The displays were meant to promote diversity and human rights. The installation “On the Shoulders of Giants” with cardboard cutouts of Abraham Lincoln, Barack Obama, and Dr. King was altered. The cardboard cutout of Lincoln was removed and replaced with a cardboard cutout of “Crocodile Hunter” Steve Irwin. A display about the Palestinian/Israeli conflict was removed in its entirety.

A Word on Palestinian Activism at MIT

In early February of this year, an artistic display featuring the Palestinian-Israeli conflict in the MLK Exhibit in Lobby 10 mysteriously disappeared (The Tech, March 3, 2009). When the non-partisan Lecture Series Committee (LSC) decided to screen the internationally acclaimed film Paradise Now, it was met with harsh opposition and wild accusations of supporting terrorism and suicide bombers. Additionally, public show of support for the people of Gaza during the recent brutal and disproportionately tragic assault by the Israeli Defense Forces was met with scorn and contention by some.

"Where do we go from here?"

Performed by the 2009 IAP Design Seminar